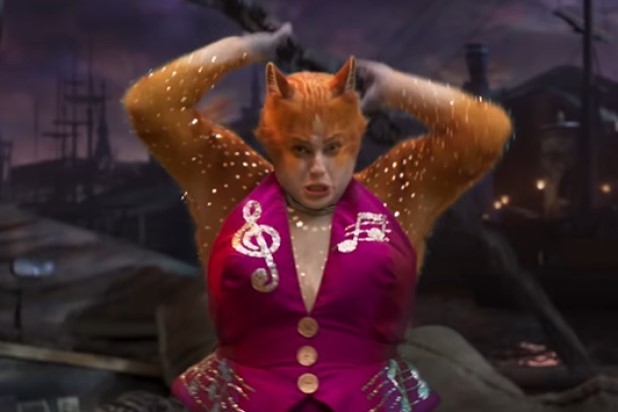 Rebel Wilson in her unzipped form.

When my sister asked me to see Cats with her, I did not realize the experience that I was subjecting myself to. I had known the opinions of critics from which I had seen online, but I was still eager to see it. I wanted to witness the box-office bomb first hand. I went into the movie expecting a train wreck and was given something far worse. I was hoping for uncomfortable scenes, a confusing plot, and creepy CGI, but I was given all of those and more.

This movie starts with my favorite character–the man that throws the main cat away–the only sane one in the whole movie. This quickly transitions into song as the cats sing about being Jellicle cats, something I still don’t know the definition to. The song itself is not horrible, but any musical feats that the song may have had is completely overshadowed by the viewer’s first look at the CGI of the cats. The fur itself looks quite good, but is a crime against humanity to be put on a human form like it was. The figures look unnatural and extremely unsettling. The disturbing overlay of human faces on fur-donned bodies made my sister and I wish to leave the theater we had payed $20 to get into. The movement of the cats adds to the disgust as they seem to jump without any laws of gravity. The song felt as if it lasted twenty minutes, when it was only a mere four minutes.

The next scene introduces Rebel Wilson’s character. This is the most troublesome scene in the movie. It is apparent in this scene that the directors asked how much can we do instead of how much should we do. The premise of the scene is the Rebel’s character, Jennyanydots, a character I didn’t know the name of until I searched it on Google, is a fat house cat, and the other animals come to her house to introduce her to the main character. The scene is filled to the brim with awful decisions and mortifying CGI. In specific, Jennyanydots shows the cats her mice friends which is the sole reason for my insomnia. The mice have awful overlays of children’s faces on them, something I am convinced that I could have done better with using iMovie. At his point, I stared at my sister with a face of sheer disgust and revulsion. Their chubby bodies probably had a mere 15 seconds on screen but it was 15 seconds too many. There were also human cockroaches that looked like they were straight out of Pixar’s A Bugs life. The horrific animations of both creatures shook my spirit at this point and I realized that this movie wasn’t going to be the funny bad movie I had thought it to be, it was just plain bad. I had thought that it couldn’t get worse, that nothing could be more jarring than the atrocities that had been presented before me, but I was surprised. In the middle of Jennyanydots’ dance number, she unzips her skin to reveal another set of skin and a dress. My jaw dropped as I looked at my sister and spoke my confusions under my breath. I am sure that the director thought that the action would be whimsical and fun. No. It was disgusting.

The next few scenes aren’t that bad if you can get over the CGI, but major plot confusion was coming into play for my sister and I. The plot involves Judi Dench playing an older cat that can give a ride to cat heaven for a cat of her choosing. In order to do this, she holds a ball where all of the contestants will perform songs to prove why they should be the winner. All of the cats are preparing for the ball when they start disappearing. The culprit is Idris Elba playing Macavity. He is making the others disappear so that he can be the only contestant, and he is doing so with… magic?? This movie very quickly changes from a poorly done light hearted movie about cats to a fantastical movie with magical beings. My sister looked over at me when he first used his magic and asked, “what is going on?” and frankly, I didn’t know.

The next few scenes involve dance numbers and more creepy animations, but nothing of importance happens. The movie had many parts where it would get very slow and nothing would really happen. This was so until Macavity did his dance number. He had worn a fur coat the whole movie, at least until this point. It was then when he took off his coat exposing his whole body. I understand that the body was all CG fur and no suggestive body parts were shown, but the image of a naked Idris Elba is still burned in the back of my head. The fur blends to look like a normal naked man. I was done with the movie at this point, but we were so close to the end, so I had to push through.

The ending portion of this film involves Jennifer Hudson being gifted the trip to cat heaven. She boards a hot air balloon because apparently that is how you get to cat heaven. As she floats away, Macavity jumps on the tail of the balloon. I thought in my head, GOD NO, PLEASE LET THIS MOVIE END! I thought it was going to have another climax with Macavity boarding the balloon, but no. Macavity gets pushed off, and there is an ending song that was quite mediocre.

The movie overall wouldn’t be that bad if it weren’t for the fact that it exists. It is a train wreck of the highest degree. Do not see it if you haven’t already. If you want to see it as a joke to see how bad it is like I did, save your money, wait to rent it or wait for it to come to cable, assuming that no streaming services will want to pick it up. The movie is by far the worst movie of 2019, maybe even the decade. It should not be classified as a musical, rather it should be dubbed as psychological horror.

The aftermath of this movie has shaken my household. I cannot look at my cats the same way as I used to. The movements of my cats remind me of the atrocities that I had seen on the silver screen. Their looks that used to bring happiness and love now bring PTSD attacks and depression. Do not see cats.