Fires on the West Coast 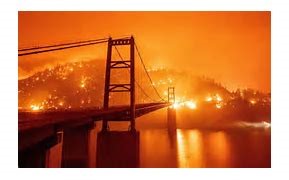 Over the past couple of months, the U.S. has been having catastrophic events happening around the country. Throughout the country, there have been many wildfires that are affecting states.

Let’s start on the West Coast with the fires. The fires along the West Coast are causing a lot of damage to people who live around there and even far away. It is affecting the environment too. With the weather constantly changing, it is making those fires worse. With wind blowing, it has caused the flames to be pushed more around, and it is causing them to spread fast and dangerously. The ashes of these fires are being seen everywhere.

BHS Student Ben Wymer said, “to hear and see the picture of the wildfires just makes you feel a different way.”

The wildfires are nowhere close to being stopped and are becoming worse and worse and with ash and smoke in the air. It is making it hard to breathe added onto of having to wear masks.

This connects to us in Brownsburg because there are people there that we know, and relatives and family, and it is our environment that we need to be protecting rather than burning it down. It affects us because it’s the air we breathe that is being filled with toxic gases. If we want a future here, we must protect the land and environment we have. The wildfires are causing a lot of people to lose their homes and many people have already died in the fires. More than 500,000 people have already been evacuated and many more are being told to leave now.