Nickelodeon Smashes on the Scene 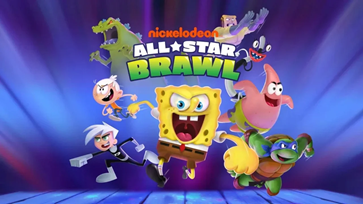 As the BHS year rounds off its first quarter, the video game club has seen little shift in their selection of games compared to the 20-21 year. With the most prevalent game dominating the club being Super Smash Bros, it seemed as if nothing would change the player demographic towards a new game. That was until Nickelodeon All-Stars Brawl dropped on PC and all consoles this past Tuesday. The highly anticipated competitor to Smash Bros features a multitude of Nickelodeon cartoon characters such as Spongebob, Invader Zim, Danny Phantom and many more.

Developed by Ludosity and Fair Play Labs, the game consists of an online as well as local multiplayer mode. A story mode is also available for any single gamers looking for their platformer fix. Boasting over twenty different stages and a possible future with new DLC fighters to come, the game looks to be a promising rival to the Nintendo mega-giant that is Smash Bros. The real question is, will it hold up to the hopes of fans?

Going into the game, I was very excited. Leading up to its release, there was a lot of hype for how faithful this game would be to games like Smash Melee. I did have some reservations though. I played through the entirety of Nickelodeon Kart Racers 2 Grand Prix and that game has a multitude of issues. There was little content, the tracks seemed very uniform, the game controlled poorly and everything from the items to the lobby seemed a little too close to Mario Kart. I was extremely worried that all of these would carry over into All-Stars Brawl.

From the moment I turned the game on, I could tell that unfortunately, some of my fears had been realized. The opening menu screen was nearly identical to Smash. I realize that some people want each game to be different, but I felt as though this menu wasn’t a bad thing; if it ain’t broke, don’t fix it. Going into the character selection screen, there was a noticeable lack of fighters. With so many available licenses, I found it odd that there seemed to be a gap in between 90’s Nick and their current shows. Licenses like Fairly Odd Parents, Jimmy Neutron and other 2000’s shows are missing from the roster. There are also odd choices with the representatives for the shows. Timmy Turner, one of Nick’s flagship characters, is not in the game, but Powdered Toast man, recognizable to a small group of the game’s target demographic, is. Only half of the Ninja Turtles are represented with Donatello and Raphael left out. With the Smash community so used to games like Smash Ultimate having 80+ fighters, it is hard to go back to having such a small character pool.

As soon as I started my first match up, I realized that the lack of content did not matter. Jumping around as Patrick on the Flying Dutchman’s ship while CatDog, Reptar and Aang brawl it out made the flaws seem like nothing. The controls, to my surprise, were very smooth and almost identical to Smash Bros. While other Smash ripoffs such as PlayStation All-Stars Battle Royale seem very heavy and hard to control, Nick’s version is very polished. Each character I played felt as though it could fit right into Super Smash Bros. Every game I played was more fun than the last. As I started to get a hang of the game and realized who I liked to play, I began to appreciate this game more and more.

Is it as good as Smash? No, but that’s to be expected. I didn’t go into this hoping for a perfect game that would dethrone Smash; what I was looking for was a fun game that pays homage to the series and embellishes it with its own spin.

Overall the game is great, but there are a couple flaws that need to be addressed. The online mode is quite buggy. Hopefully they can do server maintenance and fix this. I would also like to see the inclusion of voice acting. I feel as though the game will not feel complete until the characters have their voices. The addition of items is also something I think could enhance the game. I would assume that they didn’t put items to make the game represent the competitive Melee scene, but as a casual player, I and many others would enjoy seeing them added.

At a $50 price point, I think the game is worth the buy. If you are on the fence, maybe wait for balancing updates and new content drops. The game lends itself easily to the competitive and fun sides of video gaming. With four player capabilities, I recommend the game for any friend groups looking for something to do during fall break.