The Rings Of Power;  a continuation of Tolkien’s legendary saga; will it measure up to its predecessors? 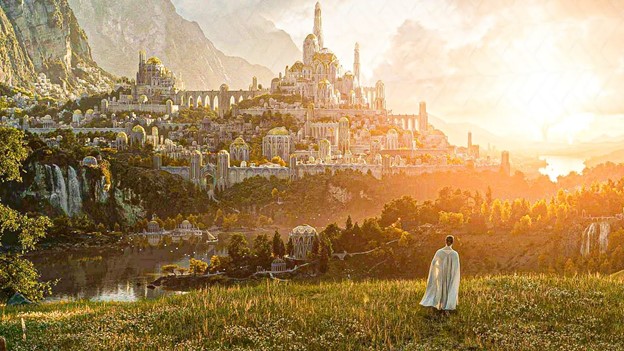 “Still round the corner there may wait. A new road or a secret gate”- J.R.R. Tolkien

The trials and tribulations of Middle Earth are tales most people are at least acquainted with. Whether you grew up reading the books, watching the movies or even just had that one loved one who never stopped rambling about it. Author J.R.R. Tolkien’s works are known far and wide, and to this day are held in high regard. Tolkien is accredited with creating a fantasy world unlike any other. The amount of time and energy he put into even the littlest details in his worldbuilding are just part of what makes his stories so compelling to read. In 2003, when the last film adaptation of The Lord of The Rings trilogy was released, many fans thought that that was it given that Tolkien died in 1973, and that there would be no new additions afterwards.

Well fast forward to 2022, and Amazon has officially announced that they are releasing a new film adaptation called The Rings of Power.

Set in the second age of Middle Earth, The Rings of Power takes place thousands of years before the events of The Hobbit and The Lord of the Rings series. This highly anticipated series encompasses the main events of Tolkien’s The Silmarillion. However, in an interview with Vanity Fair, the Amazon producers shared that some of the story will be changed to better fit a series. Because of this, it won’t be based solely on the novel, but more so the extensive backgrounds Tolkien wrote.  This continuation wouldn’t be possible if it weren’t for Tolkien’s son, Christopher Tolkien, who is often referred to as the Keeper of his father’s legacy. Christopher found and published many of his fathers’ final works including the Silmarillion and the in depth drabbles and character backgrounds that the writers and producers with Amazon will be drawing on for the series.

Now, without further ado, let’s get into it.

The Rings of Power will follow it’s two main characters, Galadriel and Elrond. The two elves made their first appearances in The Lord of The Rings and The Hobbit. Fans will get the chance to see the younger and fiercer Elven rulers. One thing the original movies did wonderfully was the storyline. While not every instance in the books was able to be translated over into the already long movies, the plot maintained its ability to encapsulate the deeper meaning of the tales.

One wonderful new feature of this series is there will be a much more diverse cast than in any of the previous movies. The previous casts, while they are greatly loved, didn’t actually feature any people of color.  Which was strange to see  as Tolkien’s books most certainly had characters reflecting many ethnic groups in real life. These casting choices have already begun pushing the doors open for more inclusivity in the fantasy genre, which is much needed to this day!

But, while many fans are still excited, some claim that the show appears to be “mid.” The biggest of the critiques are centered around costuming specifically. Admittedly, in some photos already posted, the armor and jewelry look pretty cheap, or like something plastic you’d get at Party City. The armor specifically comes off as less intricate and unique than in the earlier film adaptations. However, viewers have to keep in mind that the show is set two thousand years before the events of the movies, so the patterns and motifs that define many of the cultures are still being developed.

What hasn’t changed is the fantastical world that serves as a reflection of our own. The stories that Tolkien told contained deep and complex parallels to provide insight into our lives and troubles. In The Hobbit, Tolkien writes, “The world is indeed full of peril, and in it there are many dark places; but still there is much that is fair, and though in all lands love is now mingled with grief, it grows perhaps the greater.”

With all of the fear and hatred that has dominated the hearts of people world wide for these past few years, these words still hold the light of hope that they did in 1937.

The former films set a high standard for book to live action translation, but this new saga holds a lot of potential to forever change the fantasy genre. With a strong and diverse cast, beautiful backgrounds and a script based in Tolkien’s writings, this series looks like it’ll more than live up to the hopes of fans worldwide. So September, 2022, make sure to log on to Amazon Prime and check out The Rings of Power.