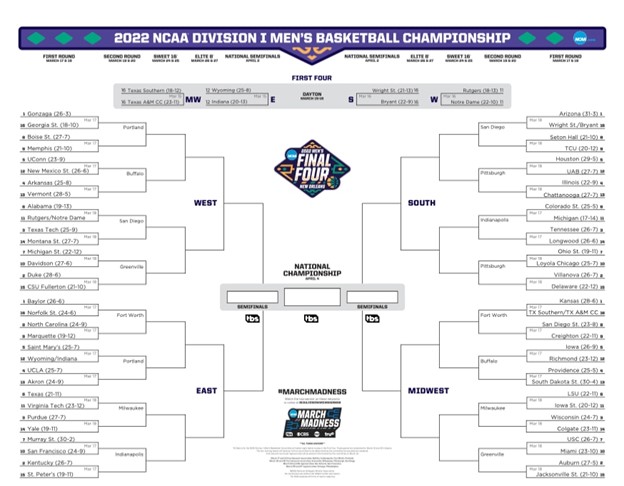 As the snow begins to melt off the sidewalk, all signs point to people ending their hibernation and enjoying the weather, especially as spring break rolls around the corner. Yet many stay inside, in front a screen watching ten players run up and down a hardwood court. They sit on the edge of their seats as the game has come down to the wire. You might be asking what is this strange force that keeps these people locked away for days watching the same sport over and over, and that would be March Madness.

The NCAA basketball tournament consist of a total of 68 division 1 basketball teams. But the madness happens in the beginning of the tournament where 32 games happen across two days. These games aren’t your run of the mill basketball games. Almost every game becomes a nail bitter where the game hangs in the balance for all 40 minutes. This level of intensity has produced iconic moments such as Kris Jenkins’ buzzer beater in the National Championship to win it for the university of Villanova over North Carolina. And who could forget Brownsburg’s very own Gordon Haywards last-second heave that was inches away from giving Butler the championship over Duke?

Not only are the games top notch, but the participation of the fans is what drives this tournament. As the Bracket Challenge has swept across the nation, everyone tries to pick out the perfect bracket in order to win a cash prize. There are thousands of ways to try and predict games, whether it’s picking your favorite mascot, looking at different statistics, going with your gut, personal reasons or just random ones. Yet having the perfect bracket is nearly impossible and being struck by lightning seems much more likely.

If there is any relief, I did my own simulation where I ranked each team and placed them into a bracket. I used a college basketball simulator to simulate each game and their outcome. I must preface that this is not accurate, however this strategy last year did correctly predict Baylor to win the championship. So, what did the simulator predict this year… Purdue University. However, to my personal opinion, I believe Arizona has the best shot to win March Madness. They have all the tools of a national champion. However others also seem to have what it takes to be the last team standing: Gonzaga, Kentucky, Baylor, Kansas are just a few.

Regardless of how you fill out your bracket, March Madness will not disappoint as more moments will happen, and different Cinderella stories shall emerge and shatter many brackets.